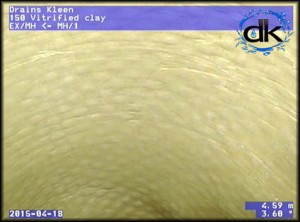 Close up of No -dig Epros patch relining system, used to seal off a sewer drain junction that was no longer needed.

Using our expertise, combined with the EPROS relining technology, we very successfully carried out this job. It was the perfect solution for a plumbing problem that needed to be remedied. Saving the company who contracted our services a lot of time and money. Should they have had to excavate and re-lay new pipe work, the job would have been a lot more time consuming and very messy, considering we were in and out in half a day.

Other relining products may not have worked so well, considering the different methods used to bond the liner to the pipe. We use the highest quality pipe relining materials and methods and because the inserted patch adheres to the entire section of pipe it covers, the EPROS liner completely blocked the junction that was no longer in use and it will remain strong for at least another 50 years.

We take pride in our work and were thrilled with the outcome. Even though it is not in the public view, a cctv drain inspection confirmed the patch is very neat and tidy and worked perfectly, so the sewage can flow easily past in the required direction.