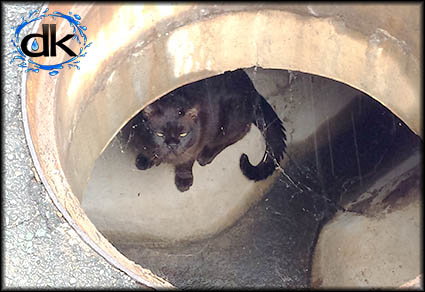 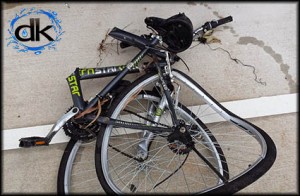 As I am sure you can imagine, when carrying out CCTV drain surveys we have come across some rather unusual sights, as we take a closer look at the condition of your drains and manholes during inspections for domestic and commercial sewer and stormwater pipes.

Apart from the usual drain blockages found during CCTV drain surveys, caused by rocks, mud, sand, garden matter and tree roots which find their way into the drains through breaks, cracks, joins and uncapped pipe ends. There is the general build up of grime, food residue and hair.

There are also many other items we regularly find, which can prove to be a nightmare and un-necessarily blocking up your drains, things that should never be flushed down the toilet, or washed down the sink, for example: Fat, tea leaves, coffee granules, baby wipes, ladies sanitary items and condoms. Not to forget the ORG’s where kids seem to love placing toys and balls, for the want of something better to do, or  the ”it just seemed like a good idea at the time” scenario.

On a larger scale, some of the stranger items we have discovered during CCTV drain surveys, include: bottles/rubbish, carpet, a mangled push bike and a fire extinguisher, all of which could have been better disposed of in a bin or at the dump. 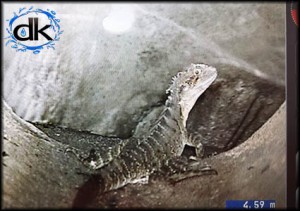 This little fella wanted a closer look in the drain too.

And then there is… the critters… CCTV drain surveys always surprise the usual drain dwellers, frogs, toads, insects and 100’s of cockroaches running and hopping around below. But, we have also encountered a few, not so common critters, like possums and lizards, even a cat, the other day I opened a manhole, and who should be looking back at me but a little black cat.

CCTV drain surveys not only allow us to report on the condition of your drains and sewers, but as an added bonus we can take a closer look at what lies beneath.

Do you need a CCTV drain survey / Inspection, (BOS) build over sewer / stormwater report or a cctv pipe inspection?

We have all of the equipment and the expertise to help you.

Call dRAINS kLEEN now and we’ll book a time to complete your drain job, as soon as possible.