How To Unblock Your Drains - dRAINS kLEEN 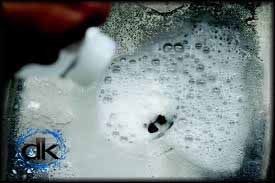 Home Remedies to Unblock Your Drains

Have you ever tried to unblock your drains yourself? Clients have often told me that they have been experiencing smells coming from their drains for a while, they have tried countless home remedies (Bi- carb and vinegar or even a store bought product), to no avail. They say it stopped the smell for a while, but, it soon returned, just as bad, or worse than before’.

Why does this happen? Well, these remedies will only mask or dilute the smells rather than actually unblock your drains, if there is a build up of grime, hair and food particles attached to the walls of the pipes. A home remedy generally does not have the ability to penetrate and remove the smelly gunk causing the blockage.

This build up can reduce the flow of water and may eventually cause a complete blockage, and if Murphy’s Law has anything to do with it, it will probably happen, when you least expect it, at the most inconvenient time. If left untreated, it is highly likely that it could end up costing you way more than you bargained for. You may be happy to keep returning to the grocery or hardware store and trying another product but ultimately you will probably end up achieving the same result.

The solution?, call in a specialist drain cleaner /plumber to unblock your drains. If they know what they are doing, your pipes will be cleared of that disgusting build up, causing those nasty smells. Meaning paranoia that your guests are uncomfortable with the smells wafting through your home, will be a thing of the past. You’ll have peace of mind, knowing water won’t be coming the wrong way up your pipes and you won’t require assistance after hours.

Aim for a complete solution, not just a quick fix